Today I’m highlighting a couple of recent donations that are cool and came out of the proverbial blue.

The first is a modest volume by a Professor of History at West Texas A&M. Jean A. Stuntz was invited to write about the subject she knew best, with one little twist…

Okay, maybe not so little.

Seriously though, this is a fun little book, playing with the mash-up trend so popular these days, but written by someone who actually knows the source material rather than (seemingly) doing a “find and replace” words job on it. So, if you know someone with an interest in Texas and/or the macabre, look into this for them.

The next item makes a nice addition to our fanzines collection. It comes to us from Judy Bunch and is very sweetly dedicated in loving memory from Jan Sadler Kauffman to Tom Perry. It’s the fabulous Warhoon 28: 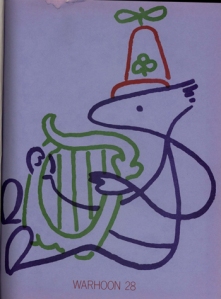 I say fabulous without irony because if you know anything about fanzines, you know they are mimeographed, floppy, and often all too short. This book is none of these things: It’s a massive hardcover deluxe compilation of all of the writings of Walt Willis. Warhoon itself, named after one of the tribes from Burroughs’ John Carter novels, was a long-running fanzine that regularly churned out issues from 1952 up until the 80s.

No. 28 was published in 1978 and is a massive 614 pages, collecting all of Willis’s “The Harp That Once or Twice” columns that put him squarely in fan history, including “The Harp Stateside” in which the Irishman wrote about his journeys in the US. He won multiple Hugos for his fan-activism and was twice brought in to WorldCons in the US.

I have a bunch of other things to share when I get time. Believe it or not this post has been composed over a week and a half. That’s what it’s like here these days.

In the meantime, do me a favor and go see John Carter one more time–it’s a great flick that’s being demolished at the box office. Until next time!